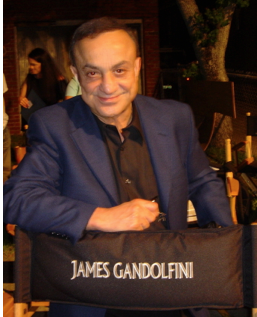 I first met Jim Gandolfini on the set of Lonely Hearts seven years ago. Ironically, the night I met Jim was during the sequence shot on the campus of the old John Gorrie Junior High School where I attended as a teenager. My wife Myra and I next saw Jim at the memorial for Jett Travolta in 2009 and just by chance we sat with Jim and his new wife Deborah Lin. We apparently bonded because the four of us talked for more than an hour in John and Kelly’s living room.

John had told me that –their past was very connected” and his dad knew Jim’s father and sold him tires. He also said Jim told him that he was his inspiration to get into the business as he would see pictures of him on the wall from movies.

Our deepest sympathy and condolences are extended to Jim Gandolfini’s wife, children and familyÄand also to Kelly, John, Ella and Ben.